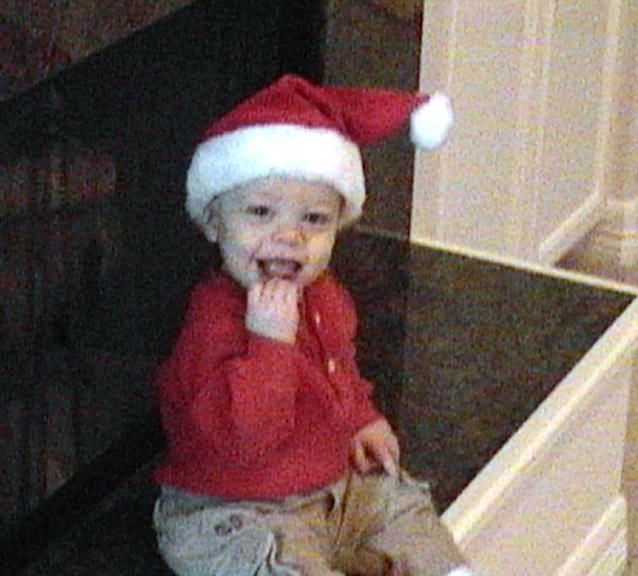 One of the tricky parts of having a public presence on the web is figuring out how much personal information to share, especially regarding your children. But my kids are also a huge part of who I am, and their stories obviously intersect with mine. That said, I want to introduce you to my oldest child. Many of you reading this will know his name because you know him. But in order to respect and honor his privacy, I’m not going to use it here. Here is his, and our, story:

That last Christmas my wife and I shared alone was a very unique one. We had hosted my family the weekend before, and we were looking forward to a nice, quiet Christmas by ourselves. We were living in Houston, Texas, and my wife was pregnant with our first child, who was due in about a month. It was Christmas Eve, and for the first time in over twenty years, it was snowing in Houston! It was beautiful, too – a genuine white Christmas, with snow that stuck and everything! We had a wonderful evening.

We woke up Christmas morning and had a nice time opening our presents, but my wife was getting increasingly worried about the baby, whom she had not felt move in 24 hours. I used a stethoscope to listen to her tummy, and I could hear a heartbeat. So I was not as worried until the next morning. That’s when I put my hand on her tummy and felt the baby move with my hand, without feeling any resistance. That scared the hell out of me.

The woman we were working with was visiting family for Christmas in El Paso, a full-day’s drive away, so she sent us to her backup physician, who happened to be on the other side of the city, about an hour away.

We didn’t pack anything, because the only two outcomes we could even think of were that we had either lost the baby or were freaking out over nothing – or maybe they would give her some medicine to fix things. Birthdays were not on our minds, at all.

On the way there, just like a good cliche’, I got pulled over for speeding… and I got out of the ticket because of my pregnant wife! The officer took one look at her, asked if she was alright, then told me to drive more carefully so I could get her there safely. I thought it was hilarious.

When we got to the hospital, it was my wife’s first time being in one for her own care. She was scared, and they wouldn’t let me in the room with her for a long time, until they felt satisfied she was safe. Incidentally, I know it’s a good thing to check for signs of abuse, but I’m not sure separating a worried pregnant woman away from her worried husband to an unfamiliar hospital room without any explanation was the best way to go about it… When they finally did come and get me, my wife was angry with them and they had a Doppler on her, which I could see on the screen showed the baby’s heartbeat – so I knew he was alive.

Then the doctor came in, they did an ultrasound, and as soon as the baby’s heartbeat showed on the screen he said “We’ve gotta get that baby out of there, right now!” Neither of us were expecting that, and we were both very, very confused. My wife was rushed into operating for an emergency C-section, and I made some quick phone calls to our parents for prayers.

And then, just a few minutes later, my son was born. To be honest, though, it was far from a happy moment. While my wife couldn’t see what was going on, I was standing by her head and could see very clearly that the baby was all gray, and folded in half with his feet on his shoulders. They said, “It’s a boy,” but while my wife smiled and said “You have a son,” all I could do was watch and pray. After a few seconds that seemed like minutes, they got him crying and he turned red all over – that’s when I remembered to breathe again.

They asked me if I wanted to hold him, and I was too scared to answer. But they decided for me, and put his tiny body – just 4 lbs., 5 oz. – into my hands.

The doctor later told me that he had come into our room convinced that we had lost our baby. What I had recognized as the baby’s heartbeat on the Doppler had also been exactly double my wife’s own heartbeat, which told the doctor it was likely not the baby’s, but an echo. That was a signal to him that the baby had died. When he saw the baby’s heart beating on the ultrasound, he knew the baby was still alive, but that we didn’t have much time. By moving so quickly, he saved our son’s life.

Today, he is in high school – a musician with the mind of an engineer. We thought at the time those 15 days he spent in the NICU were a lifetime, but the lifetime we’ve had with him are more than worth the agony we experienced each day that we had to leave him there to make the agonizingly long hour-drive back home. That particular hospital had a misguided and stupid policy that would not allow us to spend more than two-one-hour visits with him per day, and would not allow us to hold him for the majority of those visits. This has likely contributed to some of the challenges he has today with ADHD and sensory processing, which began with his problems prior to birth.

Before our first child was born, I had wondered how I would be able to love anyone as much as I loved my wife. I worried about it, in fact: would my wife become jealous? Would I neglect my son because of my love for my wife? How could my love for her be divided and shared with someone else? How could I possibly love her any less, or anyone else half as much as I loved her?

But when I held my newborn son for the first time, I realized how ridiculous those questions were. My love wasn’t divided, it multiplied. Far from being decreased, it more than doubled. I loved my wife even more than I had before, and my love for my son was instantly full and unconditional. While my love for my wife had grown over the years together, my love for my child – and subsequently for all of my children – was born with them, fully armed and operational.

My firstborn son looked like a little frog when he was born. I called him “Scooter,” because when I would put him on my chest, he would scoot all the way up to my neck. He will grow up to be a far better man than I, of that I have no doubt. I pray for him, and I pray for God to prepare for him a godly wife with whom he will share his life and love the way his mother and I have. He was our first child, the big brother, the first true miracle that grew our family and our love, and I am so thankful for him. His life is a gift, and I pray it will be a blessing to others the way it has been to us.

May you have a blessed Christmas, and may you tell the ones you love how much you love them.

One thought on “Our Christmas Miracle”