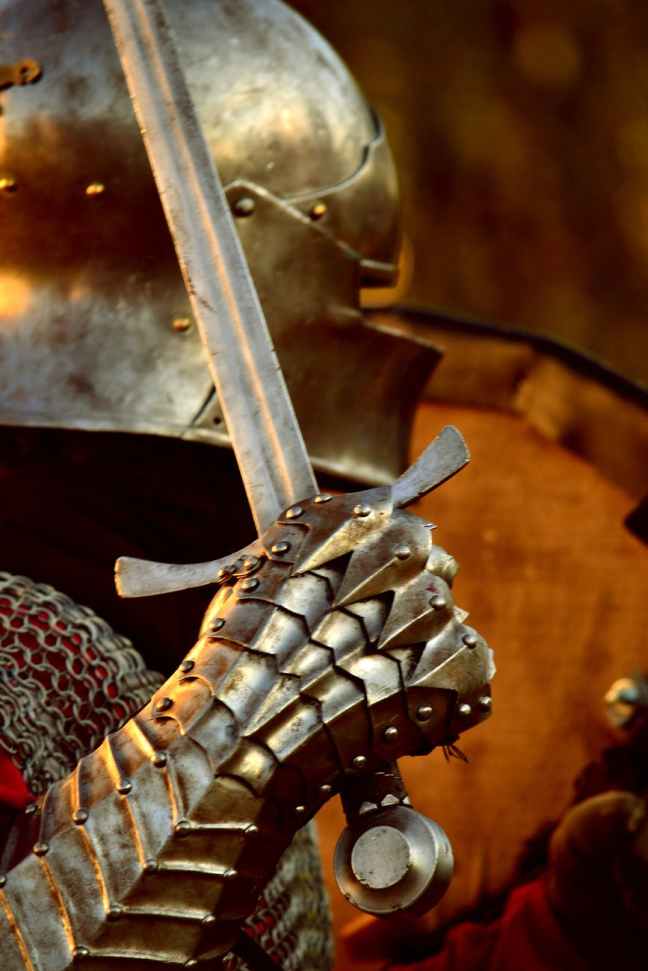 If you’ve been reading me for any length of time here, you know a big part of what I like to do is dispel myth – to shine the light of truth, history and fact on the lies that get repeated so many times they eventually become accepted as fact. I’ve already tackled some of the mythology around Halloween and Christmas, and now I’d like to tackle a very difficult subject that comes up every time any violence is committed in the name of religion, or any time a Christian speaks out against violence. That subject is violence in the name of Christianity, citing two historical events: The Crusades and The Inquisition.

Before you decide that you don’t need to read a defense of two horrific, black spots on the history of the Church, let me say that it is not my intent here to justify or excuse any violence in the name of Christ. Jesus told us to love our enemies. It is also not my intent to downplay the violence associated with these events.

What I do want, though, is to take an honest, historical, factual look at the two series of events collectively known as the Crusades and the Inquisition, and ask the question honestly: Were they really and truly “terrible deeds in the name of Christ,” as they are often described? And are they really comparable to large-scale acts of terror committed today, which they are often compared to?

Modern historians refer to a series of wars that took place between the 11th and 13th centuries collectively as “The Crusades.” These wars took place in various parts of the world for various reasons with various outcomes. And although none of these wars were at any time called “Holy Wars” during or after their undertaking, they share that modern designation because of a modern understanding we have of Islamic “Holy Wars” as being religious undertakings. Because the Crusades were sanctioned or authorized by the Pope, the head of the Christian (Roman Catholic) Church in Europe, they are interpreted today as being the same as or similar to acts of terror which are done in the name of religion. You can decide for yourself whether or not that is fair, and I will share my own opinion at the bottom.

The historical-geographical context of the Crusades is Eurasia, the point at which Southern Europe meets the Asian Middle East. On the one hand, you had Europe, which was made up almost entirely of sovereign nations which were pledged to the Christian Church. On the other, you had a rising tide of Islamic military forces that were expanding an empire through what were and are collectively known as the “Holy Lands,” where most biblical history took place. These were inhabited by Christians, Jews and Muslims.

Muhammad, the founder of Islam, had dreamed of a unified Arabia, with peace internally among Arabs (who had been constantly at war with each other), as well as externally with Jews and Christians, whom he referred to as “People of the Book,” fellow believers in the one, true God. Following his death, however, his successors envisioned and pursued an empire that spanned the world. A fundamental teaching of Islam is that the world is at war with God, and that Muslims shall not rest until the world is brought under the realm of Islam, a word which literally means “submission.” Whether this is to happen via violent or peaceful means continues to be a point of contention among Muslims to this day.

As Islamic forces began to roll through the holy lands toward Europe, they followed an Islamic teaching which did not allow any religious images or relics to remain intact. This meant that they burned crosses and other artifacts sacred to Judaism and Christianity, as well as many churches, monasteries and nunneries. Those which survived were most often converted into mosques. As for the people, it depended on the conflict. Many were slaughtered, many were coerced through violent means to convert to Islam, and some were kept as prisoners of war, who were sometimes treated very well.

After conquering Jerusalem, a city considered to be holy by both Jews and Christians, Islamic forces pressed the issue when they conquered Constantinople and turned the church there into a mosque. The church at Constantinople was a leading voice of the Church in the East, and for Christians, this was nothing less than desecrating a house of God by dedicating it to a false deity. Additionally, this placed Islamic forces on the doorstep of Europe, threatening the Church in the West. In response, the Pope called upon the rulers of Europe to both defend their borders against the Muslim invaders and to march in reclamation of the holy lands.

Thus the “Crusades” were born – military campaigns undertaken by sovereign European nations who considered themselves to be Christian, fighting against a rising tide of dominant enemy military forces who were encroaching on both their lands and their faith. And because this enemy was attacking the Church itself, the military campaigns against it were sanctioned (approved of) by the church.

On the other side, Islamic forces were absolutely acting from a religious belief that required them to eradicate all traces of Judaism, Christianity and any other religion from the face of the earth. For Muslims, this truly was a Jihad, or “Holy War.”

For both sides, the conflict was bloody and the death toll high. As is often the case in war, on both sides there were horrible atrocities and terrible decisions, and in the end the way you feel about how each side conducted itself depends on which perspective you take and which side you are more empathetic to. In terms of retaking those lands already lost, the Crusades were horrendously ineffective. But in terms of defending a Christian Europe, they were tremendously successful.

So were the Crusades truly a “Holy War” waged on Muslims “in the name of Christ” by the Christian Church? Or were they a collective response by Christian nations to the Holy War being waged on them? The latter is of course far more accurate, even if you disagree with the Church’s sanctioning of war. To describe the Crusades as violence committed in the name of Christ is to ignore historical context – though the Church is certainly not without responsibility, and to pretend its motives were entirely pure would be naive. But perhaps the Crusades are not quite the horrific black eye of Christianity that the History Channel portrays them to be…

So what about the Inquisition? Certainly that is a horrendous scar on the face of the historical Church. Well, yes – but not to the extent that it is thought to be by many people today.

To begin with, the Inquisition was a series of trials which were held in various countries by the Roman Catholic Church. On trial were Christians (that’s important) who were suspected of heresy – spreading false teachings about Christianity. These Christians included many converted Jews and Muslims who were suspected of falsely converting in order to subvert Christianity; in other words, they were believed to have converted in name only, in order to gather trust and then lead people astray by sewing false teachings.

Of the roughly 150,000 tried, less than 3,000 were executed over the course of roughly 250 years. Please go back and read that again, because that is a far cry from the hundreds of thousands or in some cases millions that are commonly cited. In fact, that’s an average of one person per month executed for what was considered a capital crime during that time.

These reflect dark times in the history of the church, and I know of no Christian who is not aware of or ashamed of it. Still, I want to emphasize that the death toll is a far cry less than what I think most people believe about it, and the victims were people who claimed to be Christians that were convicted of false teaching. Meaning, the Inquisition was not a tool of forced conversion used to torture and murder millions of innocents, as many believe. In fact…

The Inquisition killed less than 3,000 Christians convicted of heresy over the course of 250 years.

For comparison: on September 11, 2001, radical Muslims killed 2,977 American civilians: men, women and children – Christians, Jews, Muslims, Buddhists, atheists, agnostics and others – simply because they were Americans – a death toll in one day equal to the sum of 250 years of the Inquisition.

I am not justifying the Inquisition in any way. Torture is inexcusable, and execution is an horrific way to deal with something – even heresy. But there is a modern mythology that sees the Crusades and the Inquisition as consisting of millions of unjustifiable atrocities committed in order to convert people to Christianity – but the historical facts say the opposite.

Does the Inquisition qualify as evil? I would say yes, absolutely. At the same time, I would clarify that it was not an evil on the level that many assume today. and yes, perspective matters. Clarifying that something is not evil on a catastrophic scale does not imply that the something is not evil at all.

Were the Crusades evil? I don’t know if you can answer that they were any more or less evil than any war in the history of the world, which is why as Christians we should all pray for an end to all war – but until Jesus comes back, it remains true that sometimes people must take arms against evil to hold it in check, to beat it back, and to defend those who are otherwise unable to defend themselves. And in that sense, through violence comes peace. But may peace come to us all without violence – Amen.

2 thoughts on “The Evils of Christianity”