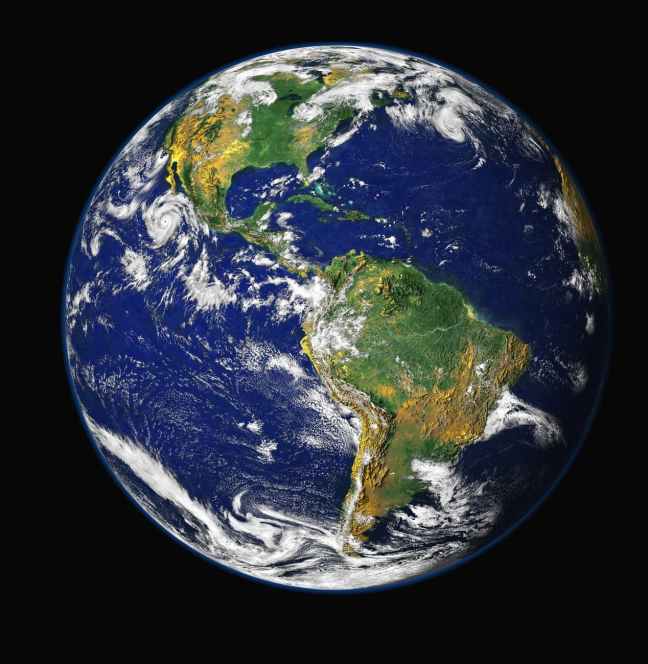 In the beginning, God created the heavens and the earth. The earth was without form and void, and darkness was over the face of the deep. And the Spirit of God was hovering over the face of the waters. And God said, “Let there be light,” and there was light. And God saw that the light was good. And God separated the light from the darkness. God called the light Day, and the darkness he called Night. And there was evening and there was morning, the first day… Thus the heavens and the earth were finished, and all the host of them. And on the seventh day God finished his work that he had done, and he rested on the seventh day from all his work that he had done. So God blessed the seventh day and made it holy, because on it God rested from all his work that he had done in creation.

Creation vs. Evolution. Religion vs. Science. Facts vs. Myths.

In this day of science and reason, what is a poor, naive, Bible-believing Christian to do with the “settled” science of evolution and its clear and obvious rejection of the biblical account of creation?

The answer, believe it or not, is to embrace the science – but the actual science, not popular opinions about the science.

Far too many Christians have given up their belief in a six-day creation because they believe it has been disproved by the bully pulpit of those who hold up SCIENCE as a god. At the other extreme are those who reject science outright, because of the mistaken belief that it is incompatible with biblical Christianity. The truth, however, is that the Christian need not feel inferior to or intimidated by the atheist, nor should he close the curtains and retreat inside the cave. Let’s take a look at the truth about creation and evolution, religion and science, fact and myth:

To begin with, stop with the silly attempts to find a compromise by making God the origin of the Big Bang, or by explaining that the six days of creation were actually six periods of development which could each have consisted of millions or billions of years.

Either you believe the biblical account of creation, or you don’t. Either way, you can’t change God’s Word to make you feel better. The hexaemeron (six days) of Genesis chapter one is an actual six days, consisting of 24-hours, complete with “evening and morning.” The Hebrew word used for day in Genesis 1 is yom, and it is a literal 24-hour day everywhere else in the Old Testament, except in cases where it is a figurative concept that is clear by context (e.g. “and it still happens to this day“).

Because, if a six-day creation is too hard for you to accept, you’re going to have to ask yourself why. If you can’t accept a six-day creation, where do you draw the line on the virgin birth, or God being born as a baby, or the Son of God dying on a cross, or the promise of everlasting life? How do you decide what parts of the Bible are not God’s Word? And if you change God’s Word to fit popular opinion now, what happens when popular opinion changes, as it always (and frequently) does?

Since no human being was there to observe the origins of the world, and since no one has yet been able to create something from nothing or recreate the conditions that led to the origins of the universe and life on this planet, it is a fact that human beings will never be able to know for sure what the truth is about the origins of everything. Think about that for a moment: it cannot ever be determined scientifically, since the conditions necessary cannot possibly be duplicated. Which means that we can have no more authentic account of creation apart from the one given by God Himself in the Bible, and everyone must make a decision for his or herself as to what they believe is the most likely or plausible explanation of the origin of things. You either believe what the Word of God says, or you believe in something else. Either way, it’s a belief system.

If you do not believe in God, then you have no reason to find any part of God’s Word plausible. But if you count yourself a Christian, you must keep three things in mind:

But in the interest of science, which by its very nature can never be settled and must consider all hypotheses, let us consider all options available to us.

Even Christians would not deny that all of life has an origin point, and that life in its many forms today has progressed (or evolved, if you prefer) in one way or another from that point. We know, for example, that there are species of animals which exist today that did not exist 1,000 years ago.

But what that origin point is – and how life has gotten from point A to point B – is where the disagreement comes in. However, it is important to understand that:

Disagreement over the origins and progression of life on this planet is not simply between creationists and evolutionists; there is at least as much, if not more, disagreement among evolutionary scientists themselves.

The problem is that the term “Evolution” does not refer to a specific system, belief or process, although it is often misused that way. There are, in fact, many evolutionary theories or systems, and they are not all compatible with each other.

As far as the origin of “stuff,” the three most widely held systems are:

Most of us have heard parts of all three systems used interchangeably, but in truth they are competing evolutionary systems. To complicate matters further, there are variations within those systems when it comes to explaining the origin of life:

Again, most of us have heard all three systems spoken of as though they are one common “evolutionary process,” but they are, in fact, very different from each other. As Christians, we actually accept what is known as micro-evolution, perhaps better known as speciation, or variation and progression of many species from many kinds. For example, Noah had to take from each kind of animal onto the ark, not every species. Meaning he could take a single pair of dogs without making sure he had each of schnauzers, dachshunds and poodles on board. Those different species descended (evolved) from the original pair(s).

But even the processes within each of those systems has variations, and those processes are also contradictory to each other. For example:

So when the generic term evolution is used without specifying what sort of evolution is meant, the conversation or explanation is extremely unhelpful and confusing. It’s sort of like telling someone to be prepared for bad weather. What sort of weather do you mean? Extreme heat? Extreme cold? Heavy rains? Heavy snows? Earthquakes? Volcanoes? Tsunamis? A term like ‘weather’ is general, and requires specification in order to apply it – and it’s no different with evolution.

When ‘evolution’ is used to explain all systems and processes, and as the argument against creationism, it’s not really a fair fight – unless the arguer is implying that literally all evolutionary ideas are more plausible than creationism, but again that would reflect a belief system, rather than a scientific one. Evolution is spoken of as though it were a single, solitary, established scientific system, when in fact evolution is a vastly variable term – and hotly contested among evolutionary scientists.

So why don’t those who argue for evolution specify what sort of evolution they mean? Because the vast majority of them are not evolutionary scientists – or scientists, at all. Mostly, they have no idea that evolution is such a disparate and variable term, they just don’t like the idea that everything was created by an all-powerful God, who might, in fact, have something to say about the way they choose to live their lives. So, wanting to believe that literally anything is more plausible than creationism, they attack those who believe otherwise in the hope that the others will back down if they yell loudly enough. Which means they hold no intellectual high ground over anyone else who has valid reasons to believe in something, they just want you to believe they do.

When “evolution” is the term used to explain everything relating to the origin, present state and in between of the universe, life and everything in existence – no matter whether the differences, changes or adaptations are great or small, predictable or random, intricate or clumsy, then evolution becomes a word empty of meaning. In fact, evolution, proposed to solve the problem of the “god of the gaps,” becomes itself the “god of the gaps.” This means it has become for many the answer to any and every question for which we do not have a better answer. Which effectively changes evolution from a scientific term to a religious one.

The best response to someone who brings up evolution is to ask them what kind of evolution they mean.

I am not denying science, whatsoever. Science is based on observation and experimentation, and science is a wonderful and incredible tool to use for exploration and understanding. And because we are always learning, our scientific understanding is always changing, as new discoveries arise and mistakes are corrected. Science is a beautiful tool we have been given by which to learn more about the world around us! But science is a tool – a method – to be used. It is not an omniscient being which speaks for itself or makes demands of anyone.

The problem is not with science, it is in the misuse and misapplication of it.

The arrogance of human beings is in thinking that we can figure out everything there is to be known about the universe we exist in… from inside of that universe.

Can the character in the video game know everything there is to know about the world he explores while still being trapped inside the game? Can the video game character know anything about the video game designer, except for what the designer programs into the game for him to know? But in our case, our Designer not only programmed in a way for us to know about Him (His Word, the Bible); He put Himself into this universe, as a human being within the universe (Jesus Christ), to show us who He is and how to navigate this universe until He comes back again to save us from our own self-created destruction – that’s the awesome God we serve!

Christians, stop fearing science. Science can never disprove God’s Word, because science is the study of God’s creation. So we welcome scientific discovery, while placing our trust in God’s Word. Because faith should always seek understanding… but understanding is not necessary in order to have faith.

“The heavens declare the glory of God, and the sky above proclaims his handiwork (Psalm 19:1).”

Give thanks to God for creation – and for the scientific tools He has given us with which we may learn more about it – and thus, about Him.

3 thoughts on “Creation and Evolution”