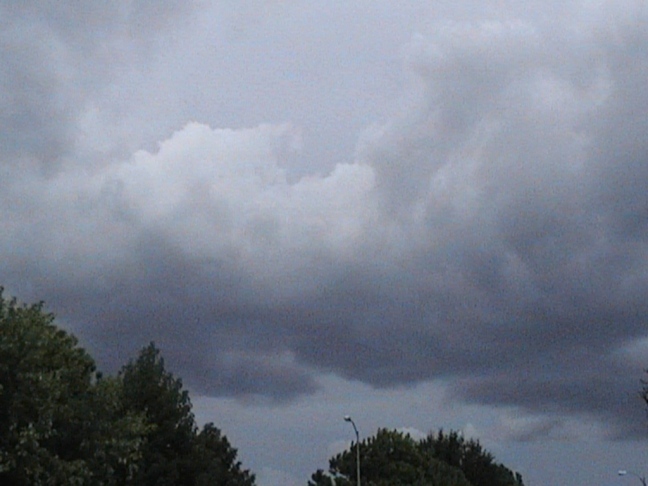 He is considered the Rock Star of meteorologists, a face and name synonymous with extreme weather. He became famous for reporting on the scene of major weather events – and he may even be credited with making bald look cool.

But while Jim Cantore has developed a reputation for reporting for The Weather Channel no matter what the conditions are, Jim Cantore never stopped a storm.

Jim Cantore may be an extreme weather rock star, but there is only one man in the history of the world whom even the winds and waves obeyed.

The disciples were on a boat on the sea of Galilee, and a violent storm had blown up, and it was extreme weather. Had Jim Cantore been there reporting, he would have been sliding back and forth on the deck of the boat, wondering how anyone could possibly survive this, let alone sleep through it.

But while the disciples were fighting for their lives to keep the boat upright, Jesus was asleep. And once the disciples realized the situation was out of their control, they woke Him up: “Lord, save us! We’re going to drown!”

Now, if it wasn’t weird enough that Jesus was sleeping through the storm of the century, what happened next is beyond weird.

What do you think He said?

Whatever it was, it worked, because it was immediately…completely… calm.

The Bible says “the men were amazed.”

That is power we can’t even begin to imagine.

It’s the kind of power that only the God who created the winds and the waves could possibly have over them.

It is power that is kind of scary to think about.

And we don’t like to think of the scary side of Jesus. It’s not an easy aspect to consider, and it’s certainly not as nice or comfortable as the fully human Jesus. We love human Jesus: sitting on a rock surrounded by children or carrying a lamb on His shoulders with a comforting smile, He makes us feel good about having a God who loves us.

And those aren’t wrong images. They just don’t tell the whole story.

The problem with picturing Jesus only in ways that make us feel safe and comfortable is that we are essentially attempting to tame Jesus – to domesticate Jesus. And that is not Jesus. Yet we often treat Him like He has been house-broken – like the family dog everyone loves having around, as long as He loves us unconditionally and never needs anything from us…

But Jesus is not the family pet – He is the Lord and Savior of all Creation! The Bible calls Him our “advocate with the Father,” which means He is at the Father’s side in heaven, arguing on our behalf – fighting for us (1 John 2:1). He is the Good Shepherd, who tends to His flocks (John 10:11-15). And yes, “Your rod and your staff, they comfort me,” says the 23rd Psalm, but the shepherd carries a rod and a staff to defend the sheep against wolves and lions and anyone else that would endanger them!

Muslims talk about the same God we do. The name in their holy book is Allah, the name in ours is Elohim, but both mean “God,” the title we use. But when God chose to reveal Himself as His Word become flesh, His only Son, Jesus Christ, our eyes were opened to the fullness of the picture of a God who would become one of us to save all of us. Muslims, along with many others, shut their eyes to that picture, and reject the name above all names. And so Islam is a Christian heresy: a false teaching about God.

When you refuse to see the whole picture of Jesus, you aren’t seeing Jesus, at all.

On that first Palm Sunday, the crowds all waved palm branches and shouted “Hosanna,” “Save us,” to Jesus, who they thought was their coming King.

But when the Jesus of reality failed to match the picture they had in their minds, they stopped shouting “Hosanna,” and started shouting “Crucify Him!”

They were scared of the Jesus who didn’t fit inside their little box.

And just like us, if we are not careful to consider the real Jesus. If we really want to know Jesus, we need to be courageous enough to see the whole picture of Jesus, even if it makes us uncomfortable.

It’s time to stop pretending that being a Christian is supposed to be easy and comfortable. Because the hardships we experience in our lives is nothing compared to facing those same hardships without hope. And it is our friends and family and neighbors in our community who face this world and an eternity without hope if we do not introduce them to the Jesus who humbled Himself to die on a cross for them. And He is the same Jesus who will return at the end of days, when it will be too late for introductions.

Because the Jesus who is coming back is not a safe or comfortable Jesus – He is the One about whom it is written,

“Then I saw heaven opened, and behold, a white horse! The one sitting on it is called Faithful and True, and in righteousness he judges and makes war. His eyes are like a flame of fire, and on his head are many diadems, and he has a name written that no one knows but himself. He is clothed in a robe dipped in blood, and the name by which he is called is The Word of God. And the armies of heaven, arrayed in fine linen, white and pure, were following him on white horses. From his mouth comes a sharp sword with which to strike down the nations, and he will rule them with a rod of iron. He will tread the winepress of the fury of the wrath of God the Almighty. On his robe and on his thigh he has a name written, King of kings and Lord of lords (Revelation 19:11-16).”

That’s a scary Jesus. But see, that Jesus is coming for us – to save us!

And like the disciples in that boat, we are never in danger when He is with us!

C. S. Lewis writes of Aslan, the great Lion who stands in for Jesus, in The Lion, the Witch and the Wardrobe:

“Aslan a man!” Beaver said sternly.  “Certainly not.  I tell you he is the King of the wood and the son of the great Emperor-Beyond-the-Sea.  Don’t you know who is the King of Beasts?  Aslan is a lion—the Lion, the great Lion.”

“Ooh!” said Susan, “I’d thought he was a man. Is he—quite safe?  I shall feel rather nervous about meeting a lion.”

“That you will, dearie, and no mistake,” said Mrs. Beaver; “if there’s anyone who can appear before Aslan without their knees knocking, they’re either braver than most or else just silly.”

“Safe?” said Mr. Beaver. “Don’t you hear what Mrs. Beaver tells you?  Who said anything about safe?  ‘Course he isn’t safe.  But he’s good.”

It is tempting to domesticate Jesus.

I mean, a lion is an awesome animal – a majestic beast – and if you had one of those as a pet, you’d be the coolest person around.

No more unwanted guests, no more door-to-door salesman – and you can forget about the Jehovah’s Witnesses!

There’s just one problem: lions are not tame.

You cannot domesticate a wild beast.

Roy, of Sigfried and Roy, was attacked by their tiger.

The Crocodile Hunter was killed by a Sting Ray.

The Grizzly Man was eaten by a bear.

But He also said “No one comes to the Father except through me.”

You can’t tame Him, but you would never want to, either.

The real Jesus conquered death and promises everlasting life – to you.

He is the only person in the history of the world whom even the winds and waves obeyed.

Because He made the winds and the waves.

So remember that, the next time you feel like your life is out of control.

Like you are being tossed about by the wind and the waves.

Our Jesus made the wind and the waves, and you are more precious to Him than silver or gold.

“In time. One day he’ll be here and the next he won’t. But you must not press him. After all, he’s not a tame lion.”